The National Essential Medicines List (NEML) of the Dominican Republic had not been updated since 2005. Over the course of 2012 and 2013, some therapeutic groups and specific lists of disease control programs, such as HIV and tuberculosis, were revised, but they were not consolidated and validated as a national list. In May 2014 the Ministry of Public Health (Ministerio de Salud Pública, or MSP) asked for technical assistance from the Systems for Improved Access to Pharmaceuticals and Services Program (SIAPS) Program to update the NEML. SIAPS[1] proposed a two-phase process: (1) the revision of the current national list (2005 version), including the latest partial revisions, by a pharmacoepidemiologist with international experience in revising essential medicines lists; (2) the analysis of proposals for inclusion, exclusion, or modifications during the first phase by professionals from institutions that form part of the National Commission for the Basic List of Essential Medicines (Comisión Nacional de Cuadro Básico de Medicamentos Esenciales, or CNCBME), from universities, specialized companies, and development aid agencies.

The initial task of the pharmacoepidemiologist consisted of consolidating the lists used by different institutions of the National Health and Social Security System (Sistema Nacional de Salud y Seguridad Social) and evaluating the importance of the inclusion of each medicine in light of national, regional, and international reference lists.[2] In cases where a medicine was not prioritized for inclusion by the referenced lists, or by quality clinical studies, the consultant made an exclusion proposal or a modification suggestion (for example, a change to a therapeutic equivalent). [3]

From a consolidated list of 1,039 medicines and their formulations, 467 (45%) were identified as not being in the reference lists, slating them for exclusion unless documentation supporting their continued inclusion was presented in the second phase of the process. In working meetings that took place in August 2014 for the second phase of the process, participants ratified most of the suggestions for exclusion or modification. They also proposed the inclusion of medicines that were not considered in the pharmacoepidemiologist’s proposal but that were included in national reference lists or protocols, or that were supported by evidence showing a favorable risk-benefit relationship and cost-effectiveness.

From this consensus, a list of 762 medicines (437 active ingredients) was agreed upon. This number includes 151 medicines, which, though not included in the international reference lists, were supported for inclusion by scientific evidence. It also includes 39 medicines that are not supported by evidence for inclusion but that are included in protocols and/or regularly used in the country.
By consensus, the initial consolidated list was reduced by 27%, decreasing it from 1,039 medicines to 762 medicines. The medicines included in the international reference lists increased from 64% to 82%. Figure 1 summarizes the decision process.

The NEML was approved by a plenary session of the CNCBME and ratified by Ministerial Agreement in August 2015, endorsing it as a reference document for the procurement of medicines in the public health sector and for supplying medicines in the Social Security System Basic Health Plan (Plan Básico de Salud del Sistema de Seguridad Social). [4]

Figure 1. Decision method for the revision of the NEML 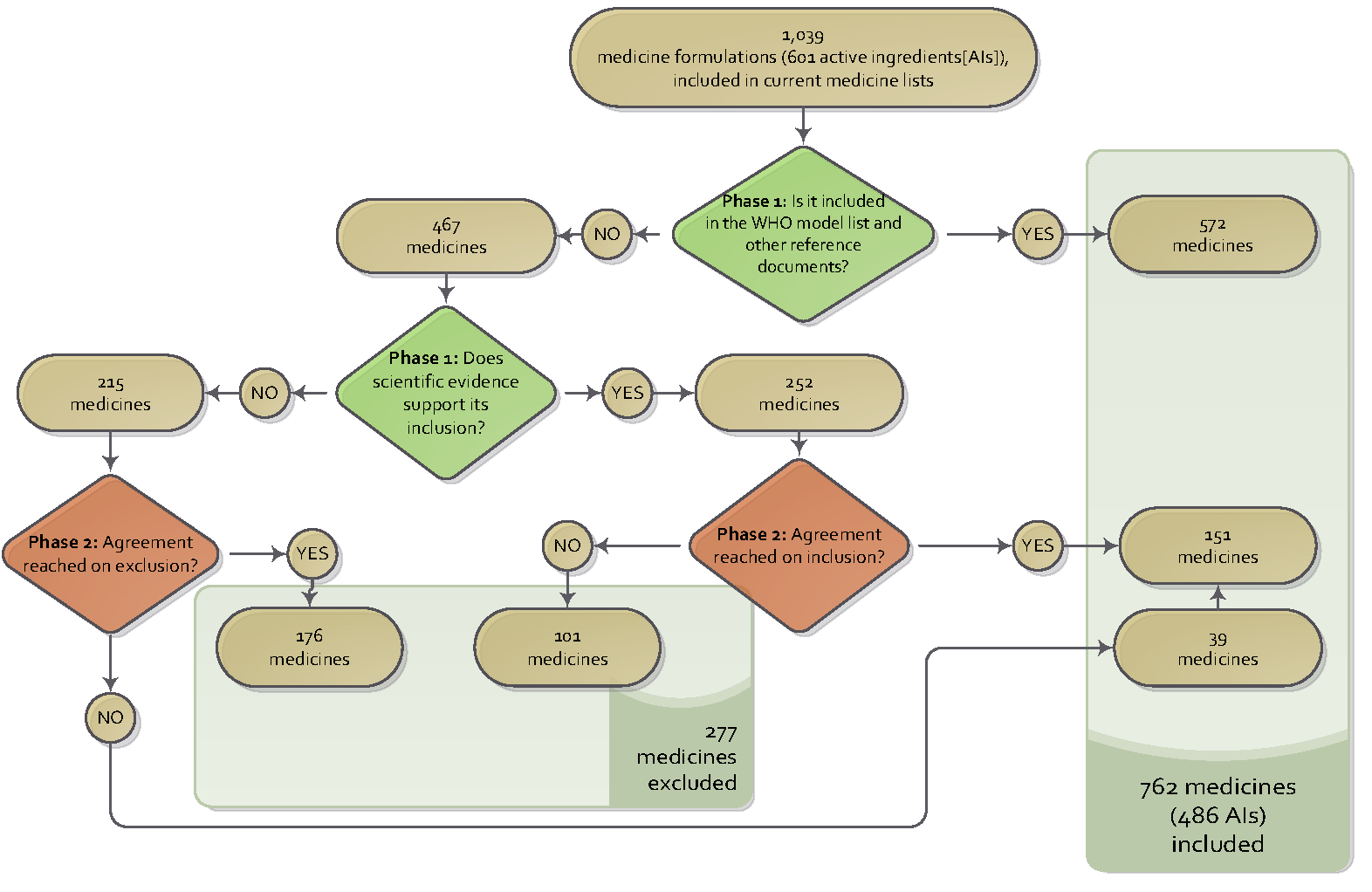