South Africa, with a population of approximately 50 million, has one of the highest HIV disease burdens in the world. In 2009, an estimated 5.7 million people in South Africa (17% of the population) were living with HIV. South Africa’s HIV epidemic is defined as hyper-endemic[1], with an HIV prevalence of 16.9% among 15 to 49 year olds and 29.3% among antenatal women[2].

The high burden of HIV in South Africa has a direct impact on the burden of TB and other co-infections. The World Health Organization estimated 490,000 TB cases in South Africa, 60% of which were co-infected with HIV[3]. In 2009, 114,500 TB patients (up from 90,000 in 2008) tested positive for HIV and 48,300 patients (up from 22,100 in 2008) were living with HIV and receiving antiretroviral therapy (ART). South Africa has the second highest global TB incidence (971 cases/100,000 population). Multidrug-resistant and extensively drug-resistant TB are on the rise.

In 2011, SIAPS with funding from PEPFAR/USAID began providing technical assistance to the South African Government to strengthen the pharmaceutical system.

SIAPS South Africa used a Comprehensive Approach to System Strengthening
Project activities were implemented in collaboration with government counterparts, international partners, other PEPFAR implementing agencies, and national associations. During the five-year project, SIAPS provided technical assistance to strengthen the central level’s capacity to support the implementation of interventions at the provincial and health facility levels.

SIAPS South Africa’s objectives were to:

In 2014, the NDOH endorsed RxSolution as a tool to manage pharmaceutical inventory. RxSolution is interoperable and interfaces with five other information systems—Patient Administration and Billing, Delta 9, Medsas, Tshwane Biometric System, and RxPMPU (Provincial Medicine Procurement Unit).

It is also linked to the National Hospital Dashboard. Through these interfaces, RxSolution can track medicines from ordering to dispensing to the patient. Because the system can be linked to other facility networks, this information can be stored on a central database.

To date, SIAPS has implemented RxSolution in 442 sites across 8 provinces. By September 2016, 453 facilities were using RxSolution for stock management, and some were also using it to dispense medicine to patients. SIAPS developed RxPMPU as an extension of RxSolution to help facilities order directly from suppliers. Through this intervention, SIAPS helped the NDOH establish Provincial Medicine Procurement Units in three provinces.

++
--
-The PLDP was established in 2012 and implemented in eight of the nine provinces in South Africa. By June 2015, 183 health care workers had completed the course and were implementing strategies to improve pharmaceutical service delivery in their facilities.

-Strengthened patient-centered pharmacovigilance in the North West and Mpumalanga provinces.

-SIAPS actively supported the establishment and strengthening of PTCs at the provincial, district, and facility levels. By promoting rational medicine use, the Eastern Cape, Gauteng, and Limpopo provinces have projected a total combined annual savings of R 24 million (approximately USD 1.77 million) per 100,000 patients using selected medicines for chronic diseases.

Interventions provided an immediate response to urgent pharmaceutical problems, developed the policy framework, and built human capacity to strengthen the health system. SIAPS played a crucial role in enhancing the coordination and management of pharmaceuticals at the national and facility levels. Users throughout the health system have increased access to information for decision making. These interventions contributed to the increased capacity of MOH personnel and raised awareness of the need to improve governance and information systems in the pharmaceutical sector.

[1] According to UNAIDS (2008), hyper-endemic scenarios refer to those areas where HIV prevalence exceeds 15% of the population and are driven by extensive heterosexual multiple concurrent partner relations with low and inconsistent condom use.

[2] Republic of South Africa, Country Progress Report on the Declaration of Commitment on HIV/AIDS, 2010 Report (March 2010). 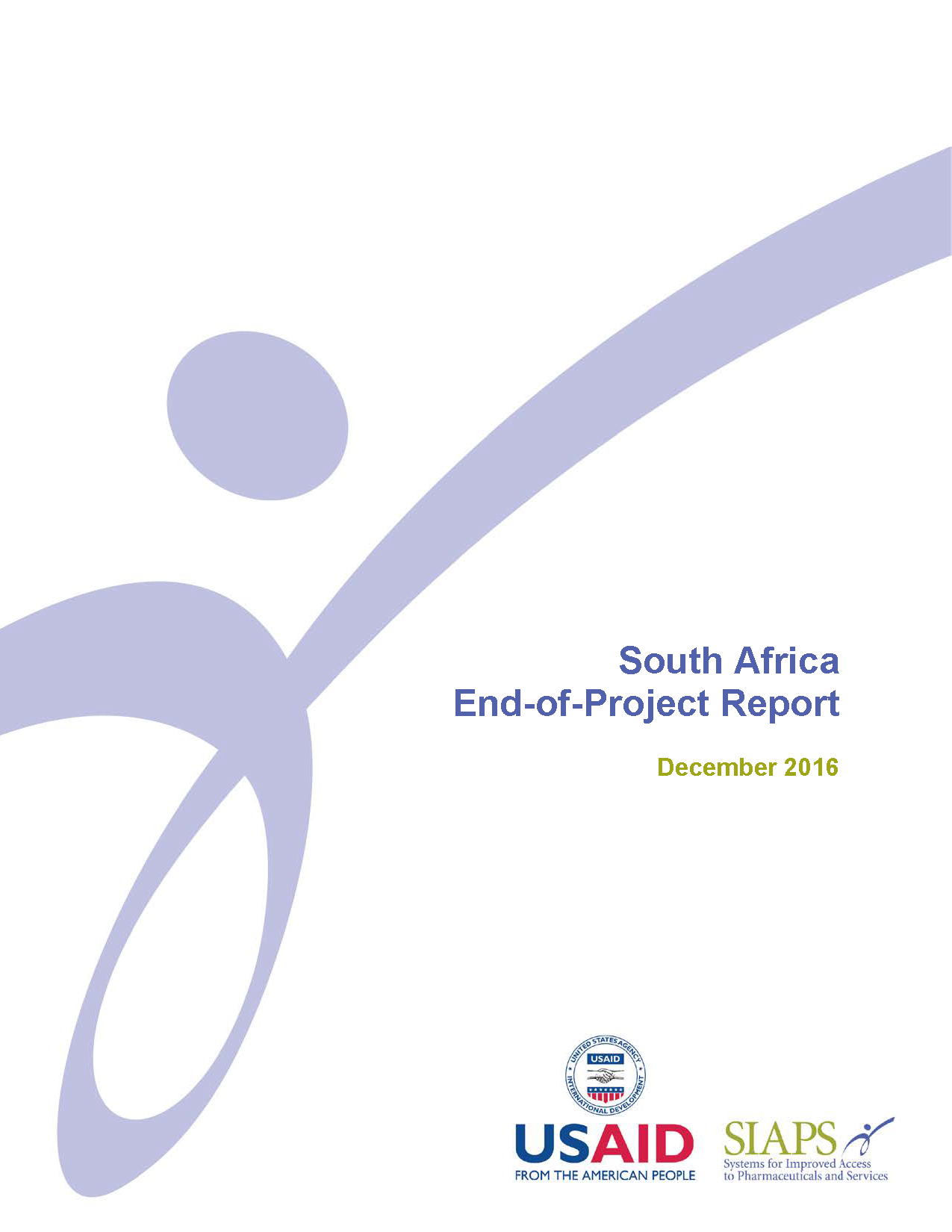