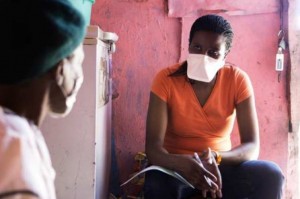 This has been cross-posted with the permission of Science Speaks. The text has been changed slightly for clarity.

Eight years ago Busisiwe Beko was undergoing treatment for multidrug-resistant tuberculosis (MDR-TB) when, after months of waiting to see a pediatric specialist, her daughter was diagnosed with the same illness. The five-month-old baby was admitted to a TB hospital where she would receive treatment for seven months; Busisiwe, however, was turned away due to lack of space.

Today, both mother and daughter are healthy—but their experience with MDR-TB didn’t stop when they were cured. Busisiwe went on to join Médecins Sans Frontières as a counselor for MDR-TB patients in her community, providing the support and medication counseling that she wished she had received during treatment.

At the recent 45th Union World Conference on Lung Health, Busisiwe was one of six TB treatment experts who presented at the symposium, “Community-driven psychosocial support: don’t forget medication counselling!” The US Agency for International Development (USAID)-funded Systems for Improved Access to Pharmaceuticals and Services Program (SIAPS), led by Management Sciences for Health (MSH), organized the symposium to explore the vital—but often under-appreciated—role of patient counseling during TB treatment.

People with MDR-TB are expected to endure a regimen of painful injections and pills for two years. With these medicines come side effects ranging from vomiting to hallucinations to deafness—all of which, in addition to being physically draining, can take a psychological toll on patients. Given small budgets and competing demands, national TB programs and donors could be forgiven for overlooking psychosocial support as a vital component of TB care. However, doing so would be a mistake and may ultimately undercut previous gains in the fight against TB. Symposium presenters Gulnara Kaliakbarova of the KNCV Tuberculosis Foundation and Li Renzhong of China’s National Center for TB Control and Prevention described how introducing support services that include treatment education and patient counseling into standard MDR-TB programs in Kazakhstan and China measurably improved patient adherence and psychological well-being.

Other presenters spoke about making psychosocial support more accessible by taking it outside the confines of a doctor’s office. For example, Asad Zaidi, of Interactive Research & Development, described an intervention in which community health workers used a smartphone-based questionnaire to quickly identify depression and anxiety symptoms in people who were diagnosed with TB. If symptoms were detected, the community health worker was able to link the patient to counseling services.

Importantly, patients are not the only people who can benefit from psychosocial support. Petros Isaakidis of Médecins Sans Frontières described how families of MDR-TB patients often experience high levels of stress when they become caregivers, often in addition to an outside jobs to make up for patients’ lost income. Niranjan Konduri of Management Sciences for Health/USAID SIAPS, concluded the symposium by describing the extent to which counseling is interpreted and applied in MDR-TB programs, noting a particular gap in medication-related counseling.

SIAPS is working to fill this need by partnering with health care providers to improve patients’ treatment experience. Two recently designed documents provide guidance to clinicians on improving patient safety during the arduous treatment regimen: Preventing and Minimizing Risks Associated with Antituberculosis Medicines to Improve Patient Safety and Drug Use Reviews—A Practical Strategy to Ensure the Rational Use of Anti-Tuberculosis Medicines.

As global TB control efforts move ahead with new diagnostics and novel medicines, it is important that patient education and medication counseling not be left behind. As Busisiwe reminded the audience: “There is no point putting so much effort into better diagnostics and treatment if we don’t support patients to understand their diagnosis and take their medication properly.”