St. Mary’s Hospital: A Modern Hospital in an Ancient City

St. Mary’s Hospital is located in one of Ethiopia’s most historic cities—Axum. Sitting at the base of the northern mountains of Ethiopia, Axum—capital of the Aksumite Empire—is one of the oldest continuously inhabited places in Africa. Today, Axum hosts a population of almost 60,000 residents and is listed on the UNESCO’s World Heritage Sites.

Axum’s antiquity, however, is in sharp contrast to St. Mary’s Hospital, serving 1.5 million people in the catchment area. St. Mary’s Hospital is a referral hospital with 186 professional staff, 134 support staff, and 150 beds and serves an average of 420 outpatients a day.

St. Mary’s pharmacy unit employs six pharmacists, 15 druggists, two pharmacy accountants, one data clerk, and four cashiers. Its annual budget rose from 1.7 million Ethiopian birr in 2010 to 6.0 million birr in 2013. The pharmacy premises were recently renovated, as part of the Auditable Pharmaceutical Transactions and Services (APTS) package of services, which improved the organization of the unit and has allowed for more privacy during pharmacist-client consultations. The lines are orderly and the workflow is streamlined and efficient. There are computers and chairs for the pharmacy staff. There is a warehouse in the back of the hospital with shelves neatly stocked with medicines and health supplies.

Today St. Mary’s Hospital pharmacy department stands as a model of patient-centric care with a patient satisfaction rate of 91%in 2013. According to St. Mary’s Chief Operating Officer, Mr. Gebre Michael Wolde Gebriel, in the past St. Mary’s pharmacy suffered from very poor dispensing practices; an inconvenient setup and inefficient work flow processes; inefficient use of the medicines budget; and frequent stock-outs, expiration, and overstocking of essential medicines.   The selection of medicines was poor and procurement practices were inefficient. Patients were not adhering to dosing and treatment advice, complicated by poor dispensing practices and medication errors.

With the support of the Regional Health Bureau (RHB) of Tigray and the USAID-funded SIAPS Program, St. Mary’s Hospital institutionalized a Drug and Therapeutics Committee (DTC). The DTC became the primary agents of change for the overall hospital reform that took place under the guidance of the Ethiopian Hospital Reform Implementation Guidelines (EHRIG).

What is a DTC?

In 2010, the Federal Ministry of Health (FMoH) issued the Ethiopian Hospital Implementation Reform Guidelines (EHRIG)—a common set of guidelines composed of 13 chapters to improve the quality and accessibility of services at all levels of Ethiopia’s public health system. One of the guidelines states that each hospital should establish a DTC to promote the safe, rational use of medicines.[2] DTCs had been established for a number of years but were largely inactive.  Today the DTC has been significantly empowered and can take on a broader role within the hospital or health facility including, as in the case of St. Mary’s Hospital, leading the operationalization of the EHRIG pharmacy standards.

The Intervention: The RHB and USAID-funded SIAPS Join Forces for Change

Before revitalizing the DTC, St. Mary’s selection, quantification, and procurement of hospital medicines and supplies were based on the personal decision of the head pharmacist. There was no evidence-based decision making on prioritization of medicines budget. Consequently, the availability of medicines was poor—wastage, pilferage, high stock outs and overstocks were common occurrences.  The absence of evidence-based decisions led to very poor and less optimal utilization of the budget allocated to medicines.

Following the publication of EHRIG, USAID-funded SIAPS met with the Tigray RHB to develop a plan of action to improve pharmacy services and the rational use of medicines. The challenge was identifying a structure within the hospital system that would be responsible for shepherding through the changes needed to meet the new standards set by EHRIG. In particular, implementing APTS required an authority that could provide the leadership needed to impose the institutional discipline of this new system of auditability and transparency.

The DTC was identified as a likely agent of change if properly empowered within the health facility system. SIAPS and the RHB worked together to develop the terms of reference for the DTC, which would then be presented and approved by the hospital’s management team. The terms of reference outlined the structure of the DTC and the roles and responsibilities for both members and the DTC itself within the hospital system. SIAPS then carried out a number of trainings to orient DTC members on how to assume the responsibilities entrusted to the committee for the significant reforms needed to be undertaken.

SIAPS, in collaboration with St. Mary’s Hospital management team, also provided the DTC with furniture, equipment, and other resources including reference materials, for the DTC to function properly. This assistance proved essential in building the capacity of the DTC within the hospital. The DTC began to meet monthly while SIAPS provided ongoing mentoring to strengthen the capacity of the committee. Over time, the DTC assumed leadership of pharmaceutical management  in improving overall pharmacy services at the hospital.

Since the institutionalization of the DTC, St. Mary’s has produced three editions of its Lists of Pharmaceuticals for St. Mary’s Hospital. The third edition includes a revised list categorized by VEN (very essential, essential and non-essential). In addition, the third edition includes reagents and chemicals, medical supplies, and medical equipment.  While the first edition was printed with financial support from USAID/SIAPS, the second and third editions were printed with hospital’s own resources, an exemplary sign of local ownership.

The hospital’s DTC regularly conducts prescribing and drug use indicator studies and continually monitors the rational prescribing, dispensing, and use of medicines, including antiretroviral drugs (ARVs). In addition, the DTC educates medical staff on rational medicines use including prevention and containment of antimicrobial resistance, and recognition and reporting of adverse drug reactions.

With support from SIAPS, the hospital DTC established a drug information service (DIS) unit in 2012. SIAPS provided a computer, internet service, office equipment, furniture, and 25 up-to-date reference books.  This unit is used a source of information on medicines and it also support the DTC in its educational activities including regular patient education at waiting areas. So far, the DIS has received and responded to 54 queries from healthcare providers and patients and developed counseling aids on the most prescribed medications. The information generated from the electronic dispensing tool (EDT) at the ART pharmacy is also used by the DTC to monitor ARV drugs prescribing adherence to treatment guidelines. 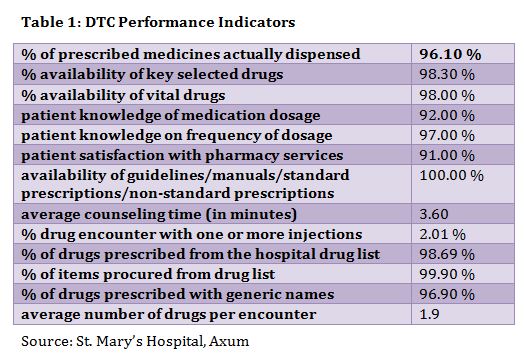