It all began in November 2001 for Mildred Fernando when she was diagnosed with tuberculosis (TB) – a preventable and curable disease which caused the death of 1.4 million people in 2011. She was only 19 years old, working on completing her last semester in college when she contracted TB from her father who sadly succumbed to it two years later.

After seeing four private doctors over the course of five years and continuing to battle the disease, Mildred was referred to the Tropical Disease Foundation (TDF) in May 2006 and found to have extremely drug resistant TB or XDR-TB, which is resistant to several TB medicines and can be very expensive to treat with harsh medication. Completely unaware XDR-TB even existed, she began treatment in January 2007 and only learned the severity of the strain she had while at a patients’ general assembly where XDR-TB treatment was being explained.

Once she completed her 18 month treatment, Mildred was declared cured in August 2008, but had to have check-ups every 6 months for two years. During her first post-treatment check-up, she was tested and found to have relapsed. This time she was put on a 24 month treatment and a portion of her right lung had to be removed.

Even though the disease left emotional and physical scars, Mildred survived XDR-TB after several years of fighting it. During a brief interview, she described her experience living with it and combating it.

How did you learn to handle it?
Having the disease was financially exhausting. I was lucky enough to have family who patiently understood and provided for my needs during my illness. My family had been my source of strength when my treatment was becoming hard to endure. I would always remind myself that I was not the only one fighting the disease but my family as well. The best thing that I could do to repay them was to be compliant with the treatment despite all of the adverse side effects that came with the treatment. The physical deterioration brought on by the disease also came mental, emotional, and spiritual anguish. I was often questioning God why I had to endure all these things, yet my questioning faith had also brought me back to believe that everything happens for a purpose and if this disease is the cross that I should carry, I should carry this with the hope that things would eventually be in favor of me.

What was the hardest part of adhering to the regimen?
The drugs that I took during my treatment had many side effects. Sometimes, it felt like the drugs that I was taking to save my life could also be the reason to lose what I was fighting for. Most common side effects were headache and vomiting which I took lightly but other side effects were very serious. After the first three months of my treatment, I suffered from electrolyte imbalance. But after that, I suffered from drug-induced hepatitis. [After several tests] the doctors decided to replace [one medication for another]. When I learned about that, I really cried my heart out because aside from the electrolyte imbalance that it brought, it could also further aggravate my hearing problems. 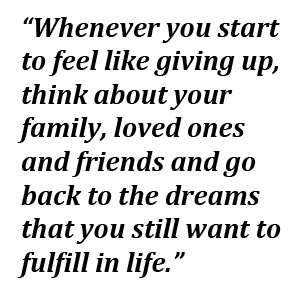 Before I had my treatment at TDF, my previous doctors had exposed me to other injectable TB medicines. All other side-effects of the medicines I could endure but the irreversible damage to my ears was the least that I could take. Yet I had no choice, I had a very limited line of drugs to take being an XDR-TB patient and choosing to save my hearing seemed to equate in giving up my life. According to ear-nose-throat doctors, I now have profound hearing loss (especially in my right ear). They said that if my work and my everyday life were not affected by that, I could go on without wearing a hearing device.

Another visible side effect that I had to endure when I relapsed from XDR-TB was the change in my skin tone. I used to have fair skin but when I started taking clofazimine, my skin discolored, even my sweat and my tears were discolored too. Until now, my skin has not gone back to its normal color, although it has improved a lot.

Any advice you would give to people currently on treatment or are about to start treatment?
Accept the fact that you have the disease. Learn about your disease. Do your own research about TB so that you may know what questions to ask your doctors and what treatment intervention you are expected to be given. Not all people may understand you, but do not let yourself down because of the stigma that TB brings. Be a responsible patient. Wear masks to protect the people around you from getting the disease. The treatment is long and difficult especially for drug-resistant TB. Whenever you start to feel like giving up, think about your family, loved ones and friends and go back to the dreams that you still want to fulfill in life.

Mildred currently lives and works in the Philippines for the USAID-funded, MSH-led SIAPS Program. She recently spoke at an event in Washington, DC that honored TB survivors. The video can be viewed here.

Learn more about SIAPS’ work in TB and the events USAID is holding around World TB Day.