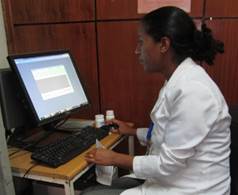 Alongside a road in a remote area of the Amhara Region, Solomon Dawit, a truck driver from the Ethiopian capital of Addis Ababa, sits waiting for a ride to the nearest town. He has two big problems: his truck has broken down and he didn’t know how long it would take to get the parts needed to fix it, and he was running out of his life-saving antiretroviral (ARV) medication. After one month, Solomon’s truck is fixed and he heads back home to Addis Ababa.

In Addis Ababa, Pharmacist Bethlehem Nega sits at her computer in the ART pharmacy of the Bole Health Center (HC). Using the Electronic Dispensing Tool (EDT), she looks at the names of “lost patients”— ART clients who have missed their appointments. The name of a client who missed his last appointment, Solomon Dawit, pops up. Bethlehem picks up the phone and calls Solomon to remind him to come to the clinic for his medicine. She also sees that he needs his regular six-month check of his CD4 count and she makes an appointment for him.

Solomon comes into Bole HC that very same day and receives a three-month supply of ARVs and his CD4 count is tested. He is relieved to have his medication because he knows his health depends on taking his pills every day. When he first came to the Bole HC, the pharmacist managing the clinic’s Drug Information Service, Belete Wale, provided group counseling on ARVs to Solomon and other patients as they waited for their appointments. Solomon has a good understanding of what the drugs do, how to take them, and how other factors, such as good nutrition, play an important role in maximizing adherence to ART.

Solomon is also happy about the call he received from the pharmacist. “When the pharmacist called me about my missed appointment, it showed they care about me as a person.” According to Bole HC’s Head Pharmacist, Workye Molla, the ART department serves an average of 800 patients per month. Every month, there is an average of 40 patients considered lost. And every month, these 40 patients receive a phone call from the ART pharmacy reminding them to come in for their life-saving ARVs.

Before the implementation of EDT, pharmaceutical management and information systems in Ethiopia were poor at capturing, aggregating, and reporting data relevant for informing decision making. This was especially true at service delivery points. According to Pharmacist Molla, “We could not follow the patients, their appointments, and regimens. We did not know the amount of drugs that were in our inventory at dispensing units. We did not even know how many patients we served per day.” With the introduction of ART in Ethiopia, it became clear that without an effective information system, it would be challenging—if not impossible—to ensure the uninterrupted availability and rational use of the newly acquired ARVs.

Solomon and the other patients at the Bole HC ART unit are benefitting from the partnership of the USAID-funded SIAPS Ethiopia team of pharmacists and Ethiopia’s public health system. SIAPS has partnered with the Ministry of Health’s Pharmaceuticals Fund and Supply Agency (PFSA) in all of its pharmaceutical systems-strengthening support to ensure government ownership and sustainability. The team is working with the Bole HC, as well as an estimated 200 ART sites using EDT software and more than 700 sites using the paper-based EDT system around the country. The goal is to establish and maintain an effective electronic information system at ART pharmacies to monitor patient adherence; drug resistance; access to medicines; prescribing, dispensing, and medicine use practices; and patient safety.

EDT is a cutting-edge information system that uses the patient as the focal point. EDT captures the critical information needed to make decisions about the individual’s drug regime as well as stock inventory and aggregate patient statistics. When Solomon first entered the Bole HC for treatment, the pharmacist used EDT to create a comprehensive patient profile, which includes his medicine history. Aggregating data on patient uptake, regimen profile, consumption, and stock on hand informs decision making by the pharmacist to make sure that Solomon and all of the patients at the ART pharmacy are getting an uninterrupted supply of the right medicine, in the right amounts, at the right times.

On the basis of Solomon’s patient information, along with the other some 800 patients per month who are treated at Bole HC, Pharmacist Molla is able to manage stock; report adverse drug events, medication errors and drug usage information; and generate customized reports for national HIV and AIDS programs and other relevant stakeholders.

Solomon’s visits to the Bole HC are a very important factor in keeping him healthy, despite living with a life-threatening disease. He isn’t aware that SIAPS supports many of the services he receives at the Bole HC ART unit. For example, SIAPS provided the ART pharmacy with the software-based information system, EDT, which keeps track of his treatment; the computer, printer, and office furniture; and the training and mentoring to staff using EDT. SIAPS paid for the phone call from the pharmacist when Solomon missed his appointment. He didn’t know that the patient counseling he received from the pharmacist was based on the drug reference books, computer, and Internet access supported by SIAPS. Solomon doesn’t know about the support that SIAPS provided to establish the Drug and Therapeutics Committee—a key player in providing the health center with evidence-based selection and quantification of medicines and the rational prescribing and use of medicines.

Solomon is also unaware of the partnerships established between SIAPS and the PFSA; the Food, Medicine and Health Care Administration and Control Authority; other public health agencies; and health facilities that drive the success of these efforts. The SIAPS/Ethiopia technical team has an on-the-ground understanding of the problems and challenges facing the country’s pharmaceutical sector. They understand that only country ownership can sustain the successful transformation of Ethiopia’s pharmaceutical sector and have developed genuine partnerships with government stakeholders to work toward a common goal. Solomon only knows that, despite his HIV status, he feels strong and healthy and looks forward to living a long and productive life.

SIAPS has rolled out EDT to some 200 sites around the country—the rest are using the paper-based system. The SIAPS/Ethiopia team supports the collection of patient uptake from 657 ART sites (113 government hospitals, 518 government health centers, and 26 private and nongovernmental health facilities). A total of 306,490 patients are covered, more than 95% of all ART patients in Ethiopia (figure 1). The SIAPS/Ethiopia team collects regimen breakdown reports from about 370 ART sites, covering 252,830 ART patients, about 80% of all patients on ART.

A year before, SIAPS provided an analysis of prescription patterns using data generated from the EDT that showed an irrational prescribing of d4T regimes, a common first-line drug regime for new patients initiating ART, which was contrary to recommendations of the new guidelines. On the basis of this information, the Federal Ministry of Health issued an amendment guideline for phasing out d4T regimens for adults. The progress of phasing out d4T regimens was closely monitored using information from EDT and by now it is almost complete (figure 2). Ethiopia’s Ministry of Health, along with other US Government partners, are using the same information to monitor implementation of the new ART guideline for pediatric ARV treatment program.