The region of Loreto, in northeastern Peru, is the country’s largest. Traversing the region is a vast network of rivers that empty into the Amazon River Basin. Loreto is home to just over 1 million inhabitants,[ii] some 45% of whom reside in rural areas characterized by low population density. Poverty and illiteracy (35% and 6%, respectively, in Loreto)[iii] are greatest among the 19 indigenous ethnic groups who call this region home. A variety of environmental, geographic, and socioeconomic conditions make malaria a prevalent problem here—and one that has proved difficult to control. In 2013, this region accounted for almost 90%[iv] of Peru’s total cases. Cases reported in that year showed an increase of 73% over 2012.

Because of the increase in the number of cases, particularly in the region of Loreto, Peru’s National Health Strategy for the Control of Vector-Borne Diseases (Estrategia Sanitaria Nacional de Control de Enfermedades Metaxénicas) requested technical assistance from SIAPS[vi] to assess the current status of antimalarial supply and support the implementation of corrective measures. 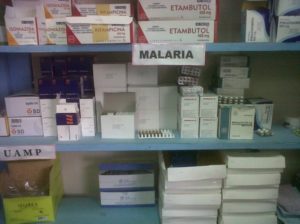 The baseline study carried out in May 2012 revealed the following: (a) inadequate programming of medicines, with a failure to take into account not only the increase in the number of malaria cases but also antimalarial use by itinerant health brigades for additional interventions seeking out passive cases; (b) delays in medicine purchases resulting from a lack of national providers and regulatory restrictions affecting purchases made on a sole-source basis and all international purchases; (c) poor storage conditions and practices affecting medicine quality and inventory management; (d) absence of a standardized distribution procedure, which led to inconsistencies between amounts ordered and amounts dispatched, quantities delivered insufficient to meet demand, increased frequency of emergency orders, and delays in delivery; and (e) low levels of personnel trained in the supply of medicines and medical supplies (particularly in areas located at some distance from the capital city), absence of self-instructional materials, and lack of a training strategy based on staff characteristics and geographic accessibility within the region. All of these problems led to medicine shortages: six of nine antimalarials showed shortages of between 8 and 157 days during the 12-month period prior to the study. Mean availability[vii] in health facilities was 50%.

Interventions
Based on these results, starting in July 2012, SIAPS began providing support to various interventions that led to improvements in regional medicine supply. These included: 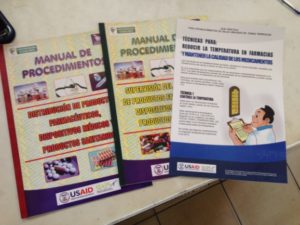 Results
An impact assessment carried out in March 2014[ix] showed a fourfold increase (411%) in the units needed required to be purchased from 2011 to 2013; an increase in availability of distribution procedures in health facilities from 8% to 60%; an increase from 62% to 80% in the number of facilities that received the quantity of medicines they ordered and an increase from 62% to 100% in the number that received supplies on the anticipated date. Emergency orders dropped from 38% to 20%, and the number of facilities with expired products decreased from 33% to 8%.

Although six of the nine antimalarials were affected by stock-outs (of between 8 and 157 days) in the regional warehouse during the 12 months preceding the baseline study (May 2012), only one reflected a stock-out following the intervention, and this was attributable to problems with national procurement. Mean availability of drugs in health facilities increased from 50% to 72%.

Conclusion
Decentralized interventions in Loreto decreased stock-outs from the second half of 2012 through the first quarter of 2014.

Even in geographically remote areas, the management of antimalarial supplies can quickly be improved by means of a systematic intervention combining the introduction of improved programming criteria, purchases made on a timely basis and in appropriate amounts, optimization of the distribution network, establishment of strategic stock levels, and improvements in training using self-instructional materials.

[vi] Since 2002, Management Sciences for Health has been an AMI partner, providing technical assistance through its RPM Plus and SPS programs, and now through SIAPS (Systems for Improved Access to Pharmaceuticals and Services).

[vii] Defined as the mean percentage of medicines available in a given health facility, based on the medicines required for the type of malaria frequent in that area (adults, children, pregnant women, and if appropriate for severe malaria) and medicines for adult treatment of the bacterial strain that is not frequent.

[viii] In December 2014, the Loreto regional warehouse received certification in Good Storage Practices from the Ministry of Health’s General Directorate for Medicines, Supplies and Drugs.