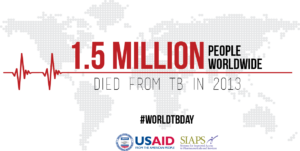 In spite of being both preventable and curable, tuberculosis (TB) remains a major global health threat. Second only to HIV/AIDS in terms of deaths caused by a single pathogen, TB killed nearly 17% of the 9 million people infected by the disease in 2013.

While effective interventions led to a decrease in TB cases in the mid-20th century, a number of factors led to a resurgence of the disease through the 1970s and 1980s. The emergence of HIV/AIDS in the 1980s brought with it a significant comorbidity burden, and TB now accounts for one in five HIV-related deaths. The rise of antimicrobial-resistant pathogens has also exacerbated the threat of TB, with multidrug-resistant tuberculosis (MDR-TB) accounting for 5% of TB cases globally, and up to 35% of TB cases in some parts of the world.

SIAPS Program: Working to Tackle the Issue
The USAID-funded SIAPS program has developed two tools to aid in increasing access to and monitoring TB treatment. QuanTB, an electronic forecasting, quantification and early warning tool, helps governments and health facilities monitor supplies of TB medicines to avoid stock-outs and ensure that patients will always have access to the treatments they need. On the case management side, e-TB manager helps to manage key information needed by national TB control programs, integrating data across all aspects of TB control, and tracking information on suspects, patients, medicines, laboratory testing, diagnosis, treatment, and outcomes.

With the help of these tools, SIAPS Program  has made significant strides in improving the management of TB services—ranging from prevention and diagnostic mechanisms to treatment and case monitoring—and ensuring access to TB medicines in a number of low- and middle-income countries. Successful interventions include:

SIAPS technical staff also had the chance to present their work at the 45th Union World Conference on Lung Health in Barcelona (November 2014) and cosponsored helped to organize the March 2015 Global TB conference in Bangkok with the Stop TB Partnership Global Drug Facility. 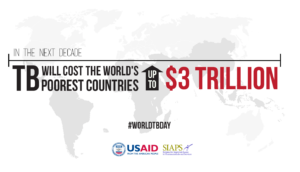 Drug Use Reviews—A Practical Strategy to Ensure the Rational Use of Anti-Tuberculosis Medicines: A manual intended to aid local health professionals in developing and conducting drug use reviews to ensure the best use—and continued efficacy—of TB treatments.

Preventing and Minimizing Risks Associated with Antituberculosis Medicines to Improve Patient Safety: A guide to planning and implementing risk-reduction strategies in the treatment of TB.

Optimizing medicine safety for HIV and TB patients: An active surveillance approach: A poster on ensuring treatment safety in areas with high HIV and TB comorbidity.