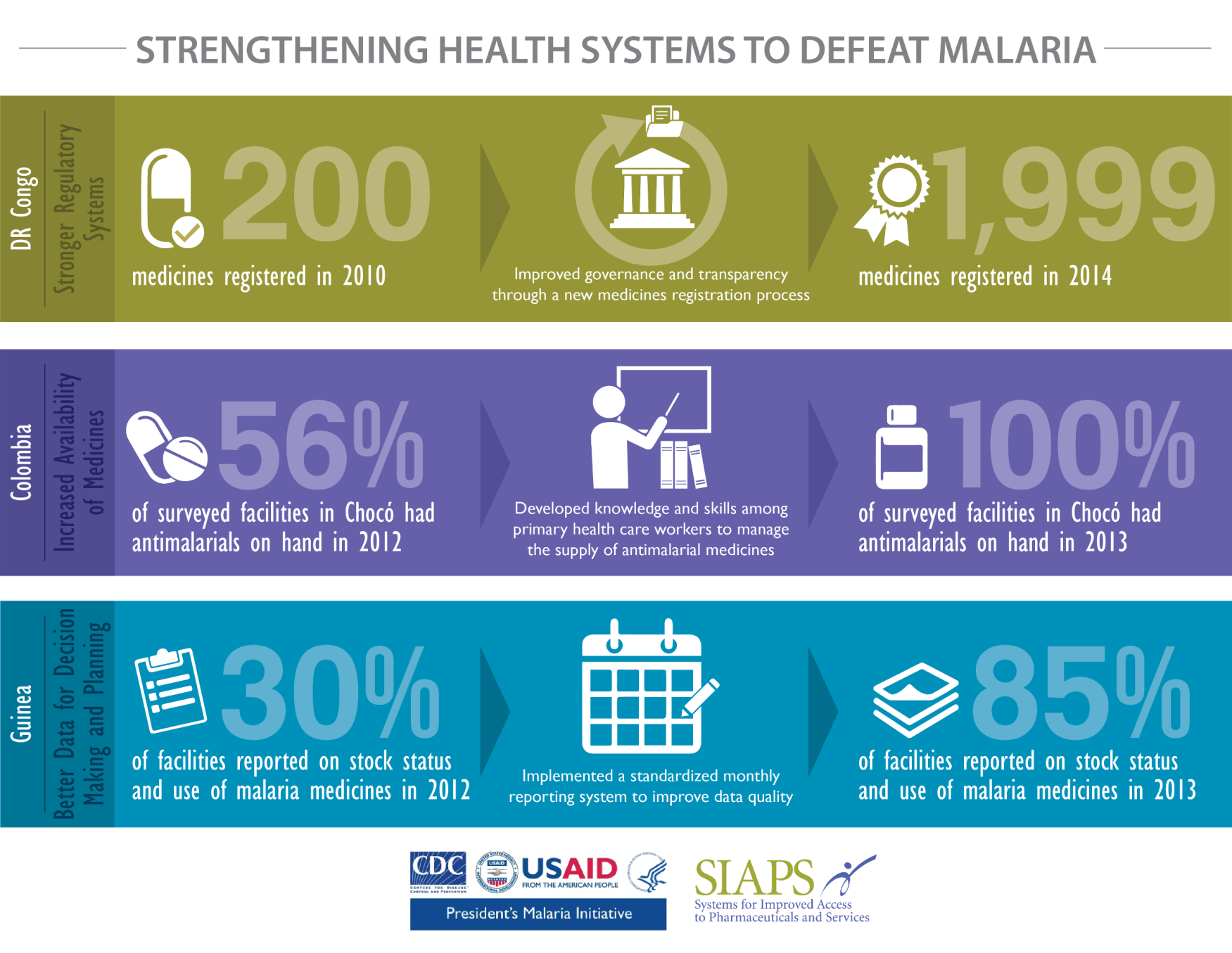 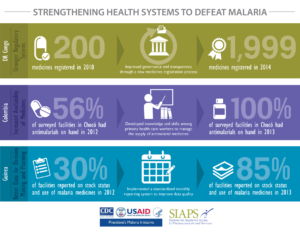 In commemoration of World Malaria Day, SIAPS joins the global health community in recognizing the remarkable strides that have been made in the fight against malaria. More than ever, people in malaria-endemic countries, especially those who are particularly vulnerable like mothers and children, are receiving effective prevention, diagnosis, and treatment services and have better access to life-saving antimalarial medicines and health supplies. In 2012, over 200 million rapid diagnostic tests and over 330 million courses of antimalarial treatment were provided globally. The scale-up of malaria interventions between 2000 and 2012 are estimated to have saved 3.3 million lives, the overwhelming majority of which (3 million) are children.[1]

As impressive as these strides are, there’s more to be done before we can eliminate malaria globally. Each year, over 200 million people are infected with the parasite that causes malaria and well over half a million die as a result. Sustained progress against malaria will require new approaches, strategies, and solutions to combat the emerging threat of drug resistance, address presumptive prescribing and treatment practices, and ensure sustainability of existing programs.

A widely-recognized approach to overcoming these challenges is to strengthen health systems to be more transparent, responsive, and effective so that medicines, including antimalarials, and other health products can be made widely available and accessible to those who need them. It is through this lens that SIAPS, with funding from USAID and the President’s Malaria Initiative, works to develop capacity in the areas of governance, health workforce, information, financing, and service delivery—all necessary components of an effective health system, and all critical to achieving long-lasting and sustainable progress against malaria.

Decades of civil unrest coupled with chronic underfunding of the health sector have resulted in major variations in the availability of essential medicines in the DRC. One challenge in making medicines more widely available is in the complexities of effectively managing the registration and approval process for new medicines. Without this approval from a national regulatory authority, medicines are not allowed to enter the country or be prescribed to patients. Historically, a lack of regulatory capacity, combined with a large backlog of applications, caused lengthy delays in the approval process.

SIAPS, working with the Ministry of Health, strengthened the regulatory capacity in the DRC by implementing a new process for the evaluation and approval of new medicines and increasing the transparency of the process. As a result, the backlog of applications was completely eliminated and the number of medicines registered rose from just 200 in 2010 to nearly 2000 in 2014. And, the number of days required to process a new application was reduced from 82 days to 72 days. Now managing the process on their own, the Ministry of Health is responsive and timely in approving new and effective medicines, and those medicines are getting to the patients who need them faster than ever before.

In Chocó, a region of Colombia with a widely-dispersed population, difficult terrain, and the country’s second-highest burden of malaria, primary health care workers are almost always the first, and sometimes last, line of defense against malaria, responsible for providing an array of prevention, diagnosis, and treatment services. But often these health care workers are not trained in how to manage, store, or resupply their stock of antimalarial medicines. A 2012 study showed that in Chocó, for example, 81% of staff at health facilities visited by SIAPS lacked the skills and knowledge to properly manage their supply of antimalarial medicines.[2]

SIAPS, through the Amazon Malaria Initiative and working with the Ministry of Health and Social Protection in Colombia, equipped primary health care workers in the Chocó region with educational materials to improve their ability to effectively dispense, store, and manage the supply of antimalarial medicines. These capacity building efforts contributed to an increase in the availability of antimalarial medicines from 56% in 2012 to 100% availability at all participating facilities in Chocó in 2013.

The availability of antimalarial medicines, diagnostics, and other prevention products in Guinea has typically been inconsistent and difficult to manage, due in part to irregular or unreliable data which serve as the basis for planning, procurement, and distribution decisions. Without high-quality data to inform supply planning decisions, facilities may receive too many, too few, or no antimalarial medicines at all, resulting in waste, shortages, or stock outs.

In 2012, to avoid a critical stock out of malaria commodities, SIAPS supported a country-wide distribution of antimalarial medicines and health supplies to all 38 health districts at over 400 health facilities. Leveraging the opportunity in this short-term solution, SIAPS began to pave the way for longer-term changes to the supply chain in Guinea by implementing a standardized monthly reporting system for malaria commodities. Within a few months, the reporting rate increased to 85% in October 2013, a significant improvement over 30% in 2012. Better yet, this data is already being harnessed to improve supply planning, avoid future stock outs, and move Guinea one step closer to defeating malaria.