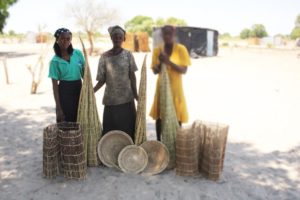 At the Kaisosi settlement in Rundu, Namibia, antiretroviral therapy (ART) patients who were once lost to follow up (LTFU) are returning for care. One of these patients, Domingos Christophine*, a 39-year-old single mother, began ART at the Kuisebmund clinic in Walvis Bay, which is almost 1,000 km from Rundu, in 2011 when she was pregnant, but over time she was LTFU.

Although Christophine was diagnosed with HIV in 2005, she did not begin ART immediately because her immunity was still strong. She had moved to the Namibian coastal town of Walvis Bay to join her boyfriend, who was the father of her baby. However, the immense difficulties she experienced while living with her boyfriend forced her to leave Walvis Bay and cross the border to Cuito Cuanavale in Angola to seek help from her late father’s relatives.

This move caused Christophine to miss her follow-up visit to the Kuisebmund ART clinic in Walvis Bay on September 3, 2014, when she would have received at least three months of antiretrovirals (ARVs). She brought her Namibian health passport to Angola in the hope of being assisted. Due to the state of the public health system in Cuito Cuanavale, she had to purchase the life-saving ARVs on her own. Christophine knew that she could not continue to buy her ARVs, nor could she return home because of lack of money.

Because she was away from the Kuisebmund ART clinic in Namibia for more than a year, Christophine was flagged in the Electronic Dispensing Tool (EDT) as an LTFU case. The community health workers (CHWs) tried unsuccessfully to contact her. Fortunately, in early 2015, her brother went to Angola and brought her back to Namibia.

Upon her return, Christophine became suicidal. “After Angola, I did not want to take the medicine again. I had no job and no source of income to support myself and my child. I wanted to kill myself,” she said.

With the help of Frai Anna Munungwa, a Project HOPE CHW who also served as her treatment supporter, Christophine overcame her suicidal thoughts and feelings of hopelessness and agreed to return to medical care. Fortunately, all information about her ART treatment history before she left was saved in the EDT. Munungwa was easily able to identify Christophine and other patients who were LTFU from the routine EDT report of patients who fail to collect their ARVs from the ART clinic 90 days past their assigned appointment.

Christophine, who is now self-employed selling kapana (barbecue), resumed ARV care in May 2016.

Just a few kilometers away from Christophine, Maria Karupu* nurses her son. She learned of her HIV status while pregnant in 2014. She began ART but refused to go for clinical appointments until September 2016, when Munungwa convinced her to return to the Kaisosi clinic. Karupu is currently undergoing adherence counseling in preparation for her re-initiation to ART. Unlike Christophine, who supports herself and her family, Karupu is dependent on her mother and sister, as well as on the income from her father’s pension.

Christophine and Karupu are only two of the estimated 1,500 ART patients who miss their pill pick-up appointments 12 months after initiating therapy at the 51 main public ART health facilities in Namibia. Many of these patients are poor and have children and families to take care of. The drought that has ravaged Namibia for the past few years has made the situation worse for many. 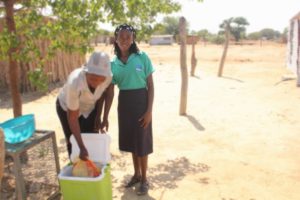 The EDT helps pharmacy staff to efficiently manage both patients and ARVs, including flagging early warning indicators of HIV drug resistance to ARVs.

This tool allows health care workers to identify and trace ART patients who default from treatment and become LTFU. The US President’s Emergency Fund for AIDS Relief, through the US Agency for International Development (USAID), funded the Systems for Improved Access to Pharmaceuticals and Services (SIAPS) Program to implement the EDT at public health facilities of the Ministry of Health and Social Services in Namibia.

According to Project HOPE’s Referrals & Sexual and Reproductive Health Programme Specialist Beauty Kwenda, the Namibia Adherence and Retention Project (NARP) has relied on EDT data to trace LTFU patients and return them to ART.

Health facilities that dispense ARVs also have patient care booklets and patient registers to capture patients’ contact information. However, the EDT prints out a list of patients on ART every month and provides more comprehensive information, which is used for tracing defaulters and patients who stop treatment.

“Appointment registers are not comprehensive enough. They are lists of names of patients and their follow up appointments. The filing system is not helpful because CHW have to go through all the files to pick out the names of clients that have defaulted,” Kwenda said.

Project HOPE’s NARP was implemented in 2014 in the high-HIV burdened regions of Zambezi, Kavango, and Ohangwena. Its CHWs follow up with defaulters and LTFU patients who are flagged by the EDT. Using information from the EDT and patient registers, CHWs track LTFU patients, arrange meetings, and bring patients back to the health facility to resume treatment.

Patients by the Numbers 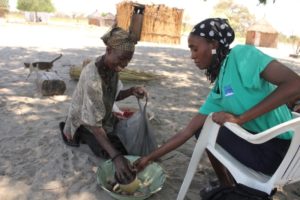 According to the EDT, more than 7,600 patients defaulted on ART between October 2014 and September 2015. The majority of these were in the Zambezi, Ohangwena and Kavango regions of Namibia. Project HOPE traced more than 7,200 of these patients and returned approximately 50% (3,560 patients) to treatment. The remainder had transferred to other health facilities, were hospitalized, or refused to return.

There were some initial challenges with the EDT because data were not up to date in the electronic system. As a result, patients who had died were still in the system as LTFU, which inflated the numbers reported by the EDT. This problem has since been corrected.

“With CHWs regularly following up and tracing people on the EDT missed appointment list and providing feedback on the tracing outcomes to the health facilities and the pharmacies to update the electronic system, the number of LTFU patients as reported from the EDT is expected to decrease with time as we update the system with outcomes from the tracing by CHWs,” Kwenda said. Fewer patients are now flagged as missing for more than three or four months because the EDT is regularly updated and patients are followed up quickly.

The EDT remains a vital tool for providing information that is used for bringing LTFU patients into care, but its more consistent use by health workers could improve results.

“If it were updated all the time, the EDT is a very useful tool. We need to encourage its consistent use and follow up on patients that are actually picking up their medicine,” said Kwenda.

*Names have been changed.

Acknowledgement: The authors acknowledge the collaboration and contribution made to this story by Beauty Kwenda, the Referrals & Sexual and Reproductive Health Programme Specialist of Project HOPE’s USAID-funded NARP, and Frai Anna Munungwa, Project HOPE’s community health worker and treatment supporter.