Global partnerships and new models of TB care are crucial to success in the fight against multidrug-resistant tuberculosis (MDR-TB), according to speakers at a panel discussion on the White House National Action Plan for Combating MDR-TB. The plan, which was released in December, aims to treat 35% of all MDR-TB patients in the 10 countries with the highest TB burden by 2018. 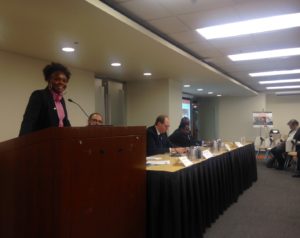 The event, held on February 11 in Washington, DC, was opened by Joanne Carter, the executive director of RESULTS. Carter praised recent advancements in research and technology that have proven invaluable in the fight against TB, but stressed that policymakers will need to showcase and invest in winning, actionable strategies in the years ahead.

“Take what’s possible and make it a priority,” she said.

Members of the panel highlighted some key strategies for managing MDR-TB. The decentralization of care in Ethiopia, for example, has significantly increased the number of TB clinics in rural areas, said Muluken Melese Aseresa, the project director of the USAID-funded HEAL TB Project, implemented by Management Sciences for Health (MSH). In turn, he said, the number of patients ever enrolled in MDR-TB treatment rose from 56 to 862 between 2012 and 2015.

Kenneth Mutesasira, the deputy project director of the MSH-implemented TRACK TB Project in Uganda, emphasized that mixed models of patient-centered care are key for reducing the burden of MDR-TB on patients and their families. A greater number of clinics, trained community health workers, and advancements in case monitoring technology are helping to promote early diagnosis and encourage adherence to treatment. Additionally, many patients can now receive treatment at home rather than spending months in hospital.

Alexander Golubkov, the senior tuberculosis advisor for MDR-TB at USAID, highlighted interventions that have reduced treatment costs in recent years. He said that providing financial support to medicines producers has encouraged the production of more TB drugs at a lower cost to consumers.

The event was closed by Chinwe Owunna, SIAPS Program’s principal technical advisor for TB, who commended the National Action Plan as  a “bold step” toward the common goal of ending TB by 2030.