The introduction of framework agreements for the 2015 public health care procurements in the Poltava and Dnipropetrovsk oblasts of Ukraine reduces the risk of stock-out and helps employees more efficiently use their time by creating more flexible, shorter procurement procedures, while decreasing the opportunity for corruption.

These framework agreements, the first to be used for pharmaceutical procurement in the public health care sector in Ukraine, are internationally recognized as a best practice. Their implementationhas helped Ukraine to start systematic changes in procurement practices in the oblasts, creating a foundation for more efficient public spending, and serving as an effective anti-corruption measure.

Inefficient and corrupt procurement practices, often defined by limited competition and opaque procurement procedures, drive up medicines prices and result in decreased access to medicines and health services. The impact of these corrupt practices in recent years has been exacerbated by economic difficulties in Ukraine, largely characterized by inflation and the sharp devaluation of the national currency, leading to unwillingness among suppliers to participate in public sector tenders. Most public tenders in 2014 failed for reasons related to the economic situation, resulting in delays in supply of medicines and leading to nationwide shortages for many medicines.

In 2014, the USAID-funded Systems for Improving Access to Pharmaceuticals and Services (SIAPS) Ukraine identified the need to leverage better pricing and more transparent procurement procedures, and began investigating opportunities to improve procurement practices. The result of this research identified framework contracting as a feasible mechanism under Ukrainian legislation that had been in place since 2012, though it had been overlooked had never before been implemented for medicines management in the public health care sector. The majority of government entities, as well as suppliers, did not consider implementing this mechanism, while those who did thought that it was too complicated to apply.

In brief, a framework contract agreement is signed between health care facilities and a set of prequalified suppliers, allowing for the purchase of medicines during a fixed period of time (up to four years) using a much more simplified procedure than spot tendering. After the initial framework contracts are established, only simple quotes are required, thereby minimizing the potential for corruption, which historically has been tied to complex paperwork requirements and allowed tendering committees to manipulate results.  The expectation is that such an approach will obviate the need for separate tenders for individual procurements, making the entire procurement procedure quicker, more flexible, and less costly. 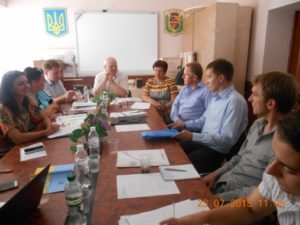 SIAPS Ukraine met with several health administrations in USAID priority oblasts, and identified the Poltava and Dnipropetrovsk oblasts as the most appropriate ones in which to pilot the framework agreement mechanism for medicines and medical supplies procurement. SIAPS Ukraine established memoranda of understanding with health authorities in both oblasts, outlining mutual roles and responsibilities in establishing the framework agreement pilots. Technical assistance was provided in developing local legislation acts and tender documentations, and to ensure that framework contracting is in line with national legislation and international best practices.

Five executive-level trainings were delivered to a total of 169 professionals, including procurement staff and oblast leadership. Several special stakeholders meetings were held with producers and suppliers, increasing their understanding of the framework contract agreement and the advantages that this mechanism can provide to contractors.

The Poltava and Dnipropetrovsk Oblast health administrations played an active role, and substantially contributed to the success of the process. The leadership of both oblasts showed great interest in and stated their support for framework contracting activities. They see significant potential for framework contracting in the country, and view it as an efficient tool for fighting corruption and streamlining procurement practices in these oblasts.

Initially, there were general concerns about how these pilots would be received by oblast and sub-oblast entities. Experience has proved that interest was much greater than anticipated. In five trainings, 169 people (28 male, 141 female) were educated. Training curriculum and supplementary materials were developed by SIAPS and have been put into practice by health care facilities, working towards the sustainability of this intervention.

SIAPS Ukraine also provided technical assistance to the health authorities as they prepared to tender their first framework agreements. Drafts of the local legislation acts were prepared, appointing oblasts’ procurers-in-chief—a critical step in advancing the framework contracting process. SIAPS worked in the oblasts to stress the importance of introductory work with potential suppliers to widely spread the information on forthcoming tenders and encourage them to participate.

As a result of intensive collaboration of SIAPS Ukraine team, and oblast health authorities and health care facilities, there were six tenders announced to date, with two of them—one for prosthetic devices at Poltava Regional Remedial Hospital and the other for antibiotics at Poltava Oblast Children’s Hospital—successfully resulting in framework agreements signed with eight suppliers for a total amount of USD 2,158,009. Three of them are still in progress.

Dnipropetrovsk has announced one framework contract tender for five types of IV solutions, and is in the process of collecting bids. Due to the high centralization of procurements in this region, this one procurement is expected to cover the needs of the majority of health care facilities throughout the region for IV solutions.

The entire set of activities in framework contracting has greatly increased understanding and acceptance of this mechanism in these oblasts, and health care facilities and their patients now have increased access to medicines—made possible by more efficient spending, reduced risk of stocking out and more flexible and transparent procurement procedures. Because simplified and relatively rapid procurement decisions can be made based on prequalified vendor quotes, vendors are now more willing to decrease prices that they historically inflated to mitigate the risk of devaluation during a long tendering process.

The examples of successfully conducted tenders under framework agreements have inspired facility administrators to rethink their approach to the procurement of health commodities. These changes are even more important due to the current process of decentralization being implemented across the country, which are resulting in the need to strengthen the procurement capacity of the local health care facilities. The results and stakeholder commitment achieved so far show the potential for more efficient utilization of public funds through the development of a more transparent and accountable procurement system.