Antimicrobial resistance (AMR) threatens the ability of existing medications to successfully treat common infectious diseases. As microorganisms become resistant to standard treatment, patients remain infectious for longer and increase the risk of spreading the resistant microorganisms. More expensive therapies need to be used for a longer duration to tackle the disease increasing the burden on the patient, their family, and society. 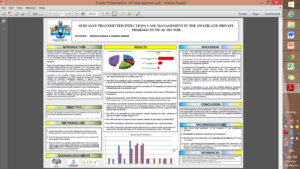 Results of management of STIs in the private sector, presented at the National Health Conference 2013.

In resource-limited settings, fighting AMR is of paramount importance. Drug-resistant strains of tuberculosis (TB), HIV, malaria, as well as common illnesses such as influenza, pneumonia and meningitis, have the potential to greatly increase the burden on already overstretched health care systems. In Swaziland, which has an HIV prevalence of 26% and an 80% TB/HIV co-infection rate, tackling AMR is a vital priority. Immunocompromised patients are already at a greater risk of common infections, and resistance to first-line  antimicrobials adds to the cost of treatment, decreases the likelihood of patient adherence due to untolerable adverse reactions from the treatment regimen, and increases the risk of adverse drug reactions.

SIAPS Program has implemented a number of interventions to promote the proper prescription and use of antimicrobials—an important step toward reducing antimicrobial resistance. The development of the Swaziland Pharmaceutical Strategic Plan 2012-16 (SPSP), for example, has prioritized the strengthening of rational medicine use (RMU). As part of its activities supporting the SPSP, SIAPS helped to incorporate RMU and antimicrobial prescribing modules into the pre-service pharmacy training curriculum at Southern Africa Nazarene University.

Additionally, in line with national sexually transmitted infections (STI) management guidelines, SIAPS supported a private-sector intervention aimed at promoting the rational treatment of sexually transmitted infections (STIs). SIAPS helped the Ministry of Health (MoH) conduct a survey on STI management in the private pharmaceutical sector. The survey showed that 82% of private-sector pharmacies dispense STI management medicines, including antibiotics, without a prescription—a practice that very often leads to increased risks of antimicrobial resistance and improper treatment using medicines that may not be effective for the condition. Additionally, none of the pharmacies surveyed had a copy of the Swaziland STI case management guidelines. 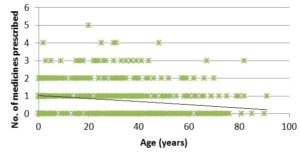 After  conducting the survey, SIAPS and the MoH recognized the need for continuous monitoring of pharmacist compliance with the national guidelines and for the containment of AMR resulting from incomplete STI management. To this end, SIAPS facilitated the training of private-sector pharmacists on STI management, as well as the dissemination of STI management guidelines, and the incorporation of the private pharmaceutical sector into the MOH reporting system.

Secondly, SIAPS supported the MoH in implementing the country’s first standard treatment guidelines (STGs) for common medical conditions in Swaziland. These guidelines are an important tool in standardizing the management of medical conditions in Swaziland and ensuring the rational prescribing of medicines for these conditions at primary healthcare level. The impact assessment of the STGs, supported by SIAPS, indicated a reduction in the percentage of prescriptions prescribed with at least one antibiotic from 59% to 52%, though this rate still remains higher than the WHO recommendation of 20-26%. Results after the implementation of the STGs showed a trend toward prescribing a greater number of antimicrobial for patients younger than 18. Further studies need to be carried out to determine the factors contributing to the high rate of antimicrobial prescribing and the age distribution of antibiotic prescribing.

SIAPS continues to support the MoH in its efforts to promote the rational prescribing of medicines, including antimicrobials, by working with prescribers and pharmacy & therapeutics committees (PTCs) in health facilities. Most recently, SIAPS supported PTCs in the implementation of quality improvement projects (QIPs) advocating for AMR containment. SIAPS assisted  Raleigh Fitkin Memorial hospital in Swaziland in carrying out culture and sensitivity testing for surgical, paediatric and ICU inpatients prescribed antibiotics in the wards for three months. The hospital PTC organised the logistics of implementing the project and informed all prescribers about the project, and the laboratory staff and pharmacist met to discuss all resources needed to implement the project.  SIAPS participated in the sensitization meetings within the hospital and also helped in the planning and reporting on this project. 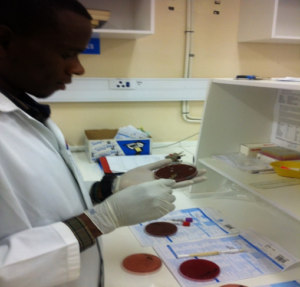 A laboratory scientist prepares samples to be cultured.

The tested cultures showed high resistance levels among antibiotics commonly used to treat infections in the hospital. Of the 74 samples collected from patients, 55 specimens produced growth of  microorganisms. Around 50% of specimens analysed showed resistance to ceftriaxone, a highly used third-generation cephalosporin. Vancomycin, an antibiotic primarily used in the ICU at the hospital showed resistance to four strains of microorganisms commonly found in the ICU.  After reviewing these results, the PTC embarked on the development of an antimicrobial  policy, intended to guide prescribers on when and how to prescribe antibiotics for inpatients at the hospital.

While much work remains to be done to ensure the rational prescribing and use of antimicrobials, the MoH has so far taken a holistic approach to the fight against AMR. Continuing to improve regulation, pre-service training for providers, and RMU activities will likely lead to further success.