Containing AMR in Ethiopia: What role does the media play?

Antimicrobial resistance (AMR) is a threat to both global public health and the global economy. However, public awareness of this issue is still low in countries with limited resources. Mass media can serve as an important ally in raising such awareness. 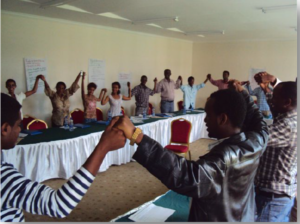 Journalists join hands to show their commitment to covering AMR in Ethiopia.

The Ethiopian Food, Medicines, and Healthcare Administration and Control Authority (EFMHACA), collaborated with SIAPS and its predecessor programs to train journalists on issues related to AMR and rational medicine use (RMU). The aim of this training was to raise media awareness and understanding of public health issues relating to antimicrobial resistance (AMR), and increase motivation to report on these issues. This capacity-building intervention was based on the recommendations of an AMR baseline survey conducted earlier and the Ethiopian strategy on the prevention and containment of AMR.

We followed up and interviewed journalists to find out the outcomes of the capacity building intervention from 2012 to 2014 if they had reported on topics relating to AMR, the rational use of medicines, or major public health problems of the country. We learned that more than 218 stories on AMR containment and rational medicine use were published and broadcast between 2012 to 2014 in mass media channels such as radio, TV, and print media.  Radio broadcasts accounted for 83.5% of all reports; newspapers for 8.7%; and TV for 7.8%. The broadcasts were carried out in 10 local languages; some of them were live examples of   The topics of these stories included AMR containment (26.1%); rational medicine use (17.9%); medicine use in TB (10.1%); antiretroviral medicine use and adherence (9.6%); medicine use for malaria (4.6%); and drug and substance abuse (5.5%). 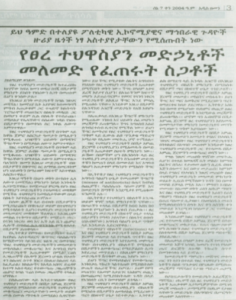 An article on AMR from Ethiopian newspaper Addis Zemen.

These findings show that in recent years, mass media have played a notable role in supporting awareness, advocacy, education and empowerment of the people in Ethiopia by broadcasting or reporting on topics covering AMR prevention and containment, as well as on the rational use of medicines. The components of this Ethiopian initiative can potentially be applied or adapted in other countries and contexts to support awareness on and the containment of AMR.  However, more research is needed to determine the effect of improved public awareness on AMR and rational medicine use issues on practices and health outcomes.