In 2009, with the arrival of antiretroviral drugs (ARVs) c in Africa under the President’s Emergency Plan for AIDS Relief (PEPFAR), Angolans living with HIV were given a lifeline for living longer, healthier, and more productive lives. As of 2012, there were a quarter of a million people in Angola living with HIV.   The challenge now is to ensure the continuous availability of HIV and AIDS medicines. This requires an efficient and effective supply chain system that uses evidence-based information for decision making. Without a well-functioning supply chain system, interruptions in ARV delivery can have calamitous results including treatment discontinuation for the patient causing viral resistance and treatment failure. On the other hand, overstocking ARVs wastes money through unused medicines that are out of date.

The USAID-funded Systems for Improved Access to Pharmaceuticals and Services (SIAPS) program uses a system-strengthening approach to improve health service delivery by assuring the availability and safe use of pharmaceutical products. The Angola National Institute against HIV and AIDS (INLS) asked the USAID Mission in Luanda to provide technical support to strengthen the HIV and AIDS medicines supply chain. 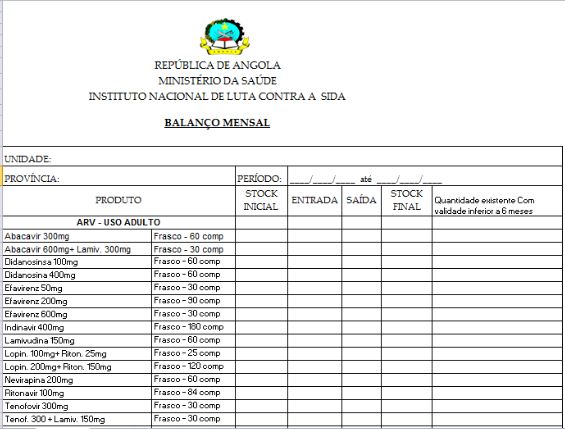 SIAPS began by conducting a forecasting exercise on the needs of all HIV and AIDS health products. The data collection and analysis showed a weak logistics management information system (LMIS) resulting in poor logistics data collection, organization, and analysis. SIAPS met with the INLS and suggested that these issues be addressed to strengthen the LMIS for the future accurate, dependable forecasting.

The most immediate solution to resolving problems in the system was to revise the HIV and AIDS monthly reporting and quarterly requisition forms. This step was needed to improve the quality and comprehensiveness of the data at the health facility and provincial level. The immediate result of these new and improved forms would be accurate, comprehensive, and timely data needed to make informed decisions.

At the end of 2013, SIAPS provided support to the INLS to organize a one-day stakeholder meeting with selected staff from the INLS, hospitals, and the UNDP/Global Fund to Fight AIDS, Tuberculosis and Malaria to identify and agree upon the key data needed to improve the LMIS. The same exercise was carried out for requisition forms—some of the missing data included quantities per item and whether or not the requisition was for a planned or emergency order. SIAPS assisted in re-designing the forms into more user-friendly formats and drafted the instructions for filling out the forms.

In February 2014, INLS senior management reviewed and approved the forms. INLS took the lead on disseminating the new forms through cascade training and field visits to selected hospitals and provincial HIV and AIDS teams. The form being used by Angola noted initial stock, entries and exits, and final stock. There is no space for days of stock-out per each product and the reported period was less clear (figure 1).

After revision, the monthly reporting form included much more useful data, such as consumed quantities per patient (for a better forecasting during each requisition) and number of stock-outs per each product. The form itself was Columns are now better defined to provide more clarity for health facility staff during reporting.

Currently, five large hospitals located in Luanda and in six provinces (Lunda sul, Lund norte, Bié, Bengo, Kwanza sul, and Cabinda). are using the new forms and their feedback from users has been positive. The same support will be given to other provinces under the current National Acceleration Plan to Respond to HIV. USAID-funded SIAPS, in working closely with Angola’s ILNS, ensured ownership and sustainability of LMIS for decision making. 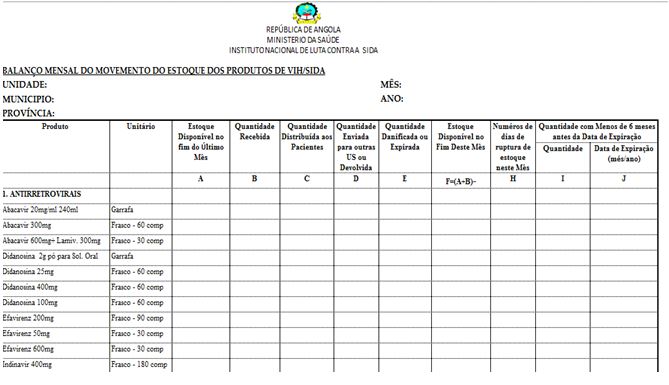 SIAPS is working with the INLS to move away from paper-based data entry and reporting to an electronic-based platform now being piloted in the country. Once the electronic-based platform is finalized, health facilities will be able to generate these reports more easily, effectively and efficiently. SIAPS is developing a study-tour to Namibia for high level officials from INLS to learn more about Namibia’s experience in generating better information for more informed decision making.

← SIAPS/DRC in the News: Improving Women and Children’s Health in the Democratic Republic of Congo
Strengthening the TB pharmaceutical management system and ensuring patients’ uninterrupted access to anti-TB medicines in Uzbekistan →