Many health facilities and county-level stores in South Sudan are practically overflowing with medicines. For a young country plagued by political instability and insufficient health care infrastructure, an abundance of medical supplies may seem to be an advantage. Instead, the situation holds the potential for a public health catastrophe:  many of these medicines are expired or have been improperly stored, rendering them unusable and potentially dangerous for consumers.

The problem dates back to 2006, when a newly autonomous South Sudan procured essential medicines and health commodities through the Multi-Donor Trust Fund (MDTF). Under this financing system, drugs were procured in KITS at the central level and distributed using a push system, which meant that health facilities received medical supplies each quarter regardless of their current stock levels. In many cases, this led to oversupply of medicines and a shortage of proper storage facilities. 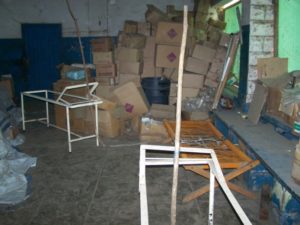 A County Store filled with expired and unusable commodities

When the MDTF closed in 2012, a new procurement mechanism called the Emergency Medicines Fund (EMF) was established by donors, among them the United States Agency for International Development (USAID), the United Kingdom’s Department for International Development (DFID) and the Norwegian government. The USAID-funded Systems for Improved Access to Pharmaceuticals and Services (SIAPS) program provided technical support to the South Sudanese Ministry of Health (MOH) and these donors to quantify and forecast medical supply needs. Knowing that the overstocked facilities did not have space to accept supplies from the EMF, SIAPS undertook a process of de-junking stores to clear out expired and unusable commodities, thereby freeing up space for usable medicines. Working with the MOH and local stakeholders, SIAPS implemented the strategy in the six counties of Central Equatoria State and the 10 counties of Western Equatoria State.

De-junking was a multi-step process, requiring sensitization workshops to gain support from the county and health facility staff; the training and formation of de-junking teams; de-junking exercises to ensure the disposal of expired products and proper storage of usable commodities; and provision of inventory management training for commodity managers.

“The de-junking has really solved a big storage problem for us in Central Equatorial State; otherwise we didn’t know how the EMF commodities would be stored in the county and health facilities,” Central Equatoria State Director of Pharmaceuticals Dr. Jacob Lazuros told SIAPS following a de-junking exercise in the state. 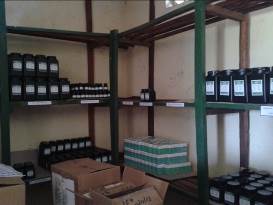 The Mundri West CHD after de-junking

With SIAPS support, Western and Central Equatoria states have made great progress towards clearing out their pharmaceutical storage facilities, implementing mechanisms for the proper storage of new medicines, and developing plans to make the progress sustainable. The success has been so great that it has led donors and implementing partners in other parts of the country to look to SIAPS for guidance in implementing similar strategies.

In collaboration with local stakeholders, SIAPS is continuing to build on it success and is working to take the next steps by implementing a pull system, in which facilities request medicines based on expressed need. The work carried out by SIAPS, in collaboration with the MOH and implementing partners, is helping to ensure the more efficient – and safer – storage and use of pharmaceuticals in South Sudan.