“Health care is not about what doctors and nurses do in hospitals…there are a range of different stakeholders that need to play their parts.”

This comment by key note speaker Dr. Sania Nishtar at the “Engaging Pharmacists in TB Care and Control in Pakistan” stakeholders’ meeting this week in Islamabad, Pakistan, highlighted the importance of involving all care providers in TB diagnosis and treatment. Dr. Nishtar, a former federal minister and founder of the nonprofit think tank Heartfile, noted that private sector pharmacists are a crucial partner in increasing the number of people who are properly diagnosed and treated for tuberculosis (TB). Pharmacists often have close ties to the community and frequently serve as the first point of contact with the health system. The meeting was also addressed by the National TB Program (NTP) Manager, Dr. Ejaz Qadeer; the President of the Pakistan Pharmacists Association, Dr. Khalid Saeed; NTP Public-Private Mix (PPM) Coordinator, Dr. Farah Hafeez; Director of the Department of Pharmacy, Hamdard University, Dr. Azhar Hussain; and consultant for the Systems for Improved Access to Pharmaceuticals and Services (SIAPS) program, Mr. Ayyaz Kiani of DEV-NET. 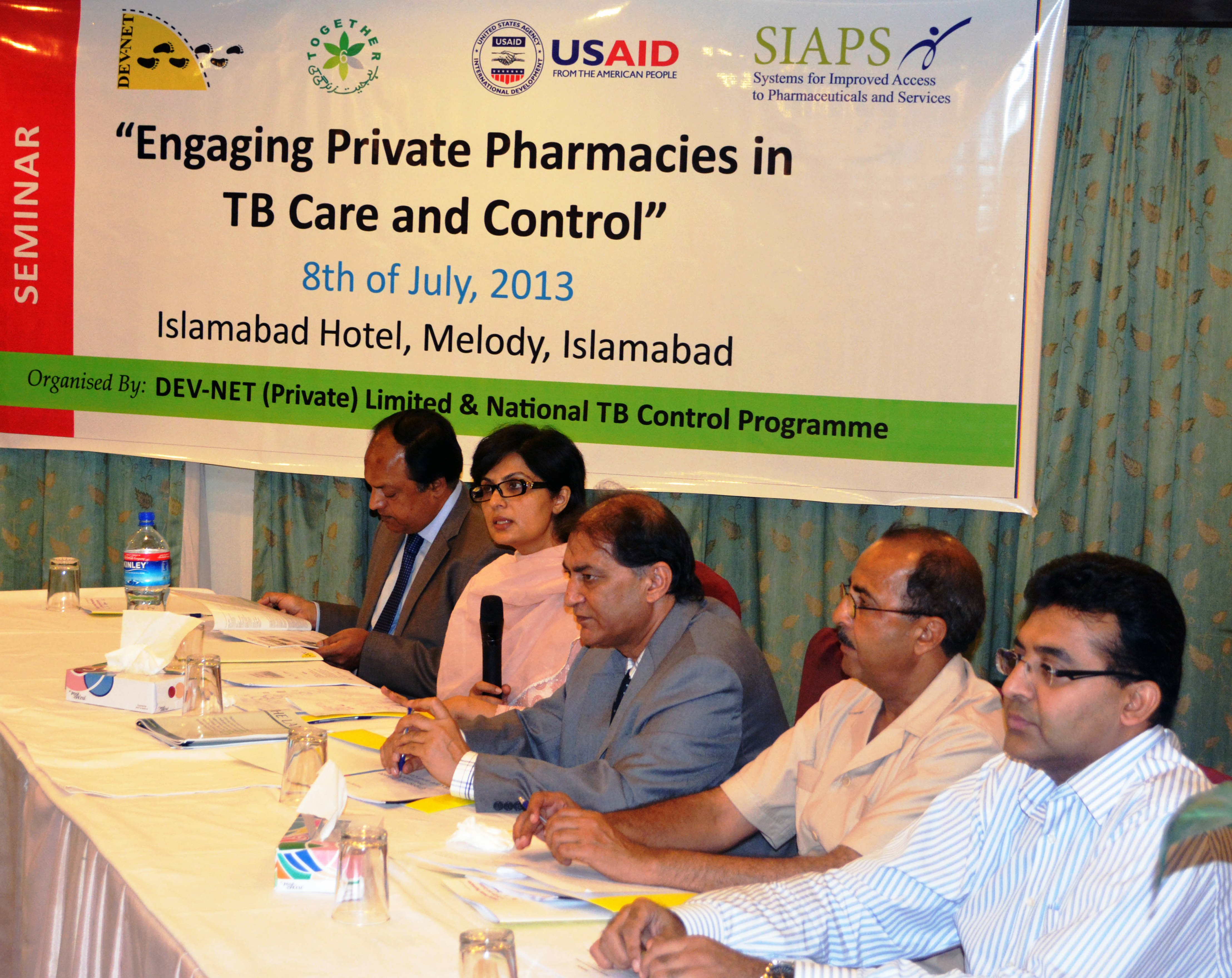 Treatment for TB is long, and adherence to correct regimens is the cornerstone of tackling the epidemic. Because pharmacists have historically been underutilized in TB prevention and care, the NTP of Pakistan partnered with the USAID-funded SIAPS program to pilot an intervention to involve pharmacists in TB case detection and referral. The results from a baseline survey of TB knowledge among pharmacy sales staff in four urban areas of Pakistan were presented at this week’s meeting to stakeholders that included representatives from the Ministry of Health, universities, and pharmaceutical manufacturers, among others. Out of 75 participants at the stakeholder meeting, 19 were community pharmacists, highlighting the NTP’s dedication to include perspectives of these providers in its national strategy for TB care. The event drew attention from a variety of local and international news media, including The News International.

In recent years, the added value of including all care providers in TB control has been increasingly promoted by a variety of international organizations and donors. For example, the WHO Stop TB Strategy recognizes the engagement of all care providers, including pharmacists as one of the six pillars of delivering high-quality TB care. This recommendation has been echoed by the United States Government (USG) and is a key methodology in many USAID programs, including SIAPS.

An impact evaluation study in Pakistan found that training laypeople in the community to screen for TB in private clinics and then linking patients to free diagnosis and treatment from a NTP approved private facility was one of several interventions that increased case detection two-fold over that observed in the control area. However, Pakistan cannot afford to ignore retail pharmacies in TB control, given their ease of accessibility, presence of few qualified staff, and lack of knowledge of both TB and the NTP.