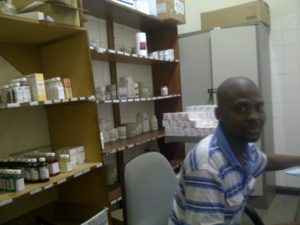 The main challenge in Lesotho’s pharmaceutical sector is the unreliable supply of essential medicines as well as the fact that the quality of medicines circulating in the country is not known. One of the major reasons is inefficiencies within the supply chain system, specifically weak information management systems that do not support decision-making in supply chain. This resulted in the Global Fund to Fight AIDS, TB & Malaria (GFATM) setting a condition precedent which the principal recipient had to address for the country to qualify for further disbursement of funds. The GFATM had requested that the recipient establish a robust and functional management information system for the antiretroviral therapy (ART) program.

The Ministry of Health (MOH) established the Pharmaceutical Management Information System (PMIS) with the aim of providing information to drug supply management (DSM) staff through scheduled and on-demand reports for management control, informed decision-making and strategic planning. By using RxSolution, which was produced by USAID-funded SIAPS predecessor – Strengthening Pharmaceutical Systems Program – it assists the MOH in implementation of PMIS. Data from RxSolution is used to meet all the reporting requirements for PMIS. WHO early warning indicators (EWI) can also be tracked using the system at ART sites.

The Global Fund supply chain specialist from Geneva along with SIAPS visited Maluti hospital which is utilizing RxSolution for ART pharmaceutical management to conduct data quality checks. The pharmacy technician in charge of ART pharmacy, Mr. Sello Lechesa, clearly stated that since its implementation, they have been able to calculate average monthly consumption for adults on ART and that information is also used to accurately provide the number of people currently on ART during the reporting period.

The outcome of the intervention was to improve the quality of data generated from sites. Several errors (especially transcription) have been minimized through use of RxSolution. The system was confirmed to be a very helpful tool by the courtesy team as a measure of consistency and accuracy between the recorded data and reported information. Ninety two percent of information from sites using RxSolution is accurate compared to 78% prior to the introduction of RxSolution. These data quality dimensions play an important role in terms of making quantifications needs and procurement of ARVs in the country.

So far, RxSolution has been implemented in 11 hospitals while the scale up of the system is ongoing. Continued on-the-job trainings during supportive supervision and mentoring visits ensures that the system is sustainable not only in maintenance but as a continued effort to build capacity among health care workers.

Ultimately, data generated from sites will be used to provide robust and comprehensive information to complete the pharmaceutical management framework for better health outcomes as a mandatory effort set by the SIAPS Program in support of the MOH.